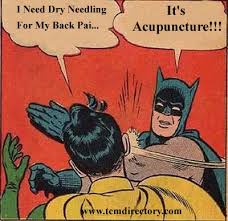 A couple of patients pointed out to me that the Courier-Journal ran an article on dry needling last Friday.

As a board member of the Kentucky State Acupuncture Association I felt it was in our profession’s best interest to reply to the article with a letter to the editor.

So I want to use this post to republish our view point and also elaborate on it some more than just the 200 word limit they allow you allow you for a letter to the editor.

The area of concerns I have personally and professionally is two-fold:

2) The real kicker and issue of concern is that use of this semantic distinction allows physical therapists to work around establishing any training guidelines. The Kentucky Physical Therapy Board was asked to give an opinion on whether physical therapists can do dry needling and gave a response back in March 2010. Now, this is what boards are supposed to do: answer questions about scope of practice as the field evolves. But the crux is, they know they cannot say “we can do acupuncture” because that is licensed by the medical board. So they pose it as a question of “dry needling” because there is no Dry Needling Board–and there doesn’t need to be because it’s a technique the physical therapists developed. And of course they say yes, citing that the physical therapy scope of practice is “broad” enough when KRS 327.010(1) states they can perform “invasive or noninvasive procedures…as it relates to physical therapy.” And the Attorney General’s office reviewed their opinion and sided with them, so that should end the discussion. But a technique that carries with it inherent risks should come with more concrete guidelines for performing it than simply requesting the physical therapist be “competent in performing this intervention.” That’s just an opinion I have, most of my colleagues have and I would assume a lot of patients have as well.

So my personal concerns aren’t primarily aimed at battling for turf, but rather protecting patients and the quality of the practice, regardless of who is performing it. I want patients to be able to find relief, I don’t care whether that’s at my clinic or a doctor’s office or a physical therapist’s. And in a lot of situations I encounter, it is better for the patient overall if they can get multiple services in one location. It’s enough to be in pain. To then add on to that going from doctor to physical therapist to acupuncturist to whomever else can just make a person dealing with pain all the more exhausted and not give them moments where they can say “At least I’m at home or with friends.”

When patients come to a physical therapist’s office, they generally assume that there is a minimum threshold of training for a given technique, otherwise why would they or their insurance be forking over all of this money? But most physical therapy schools hardly even touch on “dry needling” in a didactic setting let alone any actual clinical time practicing it. I know this because I have asked physical therapy students and looked at course curricula for physical therapy schools. It’s just not explicitly there that often. Oh some individual students may do their “advanced seminar” on dry needling or have a clinical supervisor that uses it, but there is no formal requirement to be trained in it. I am well aware there are many physical therapists who are quite capable of adding new techniques to their practice. Some practices probably even self-regulate their practitioners, requiring that they attend multiple weekend classes that included didactic and clinical training and should be applauded for it. But what about all those that don’t and can point to their board’s opinion?